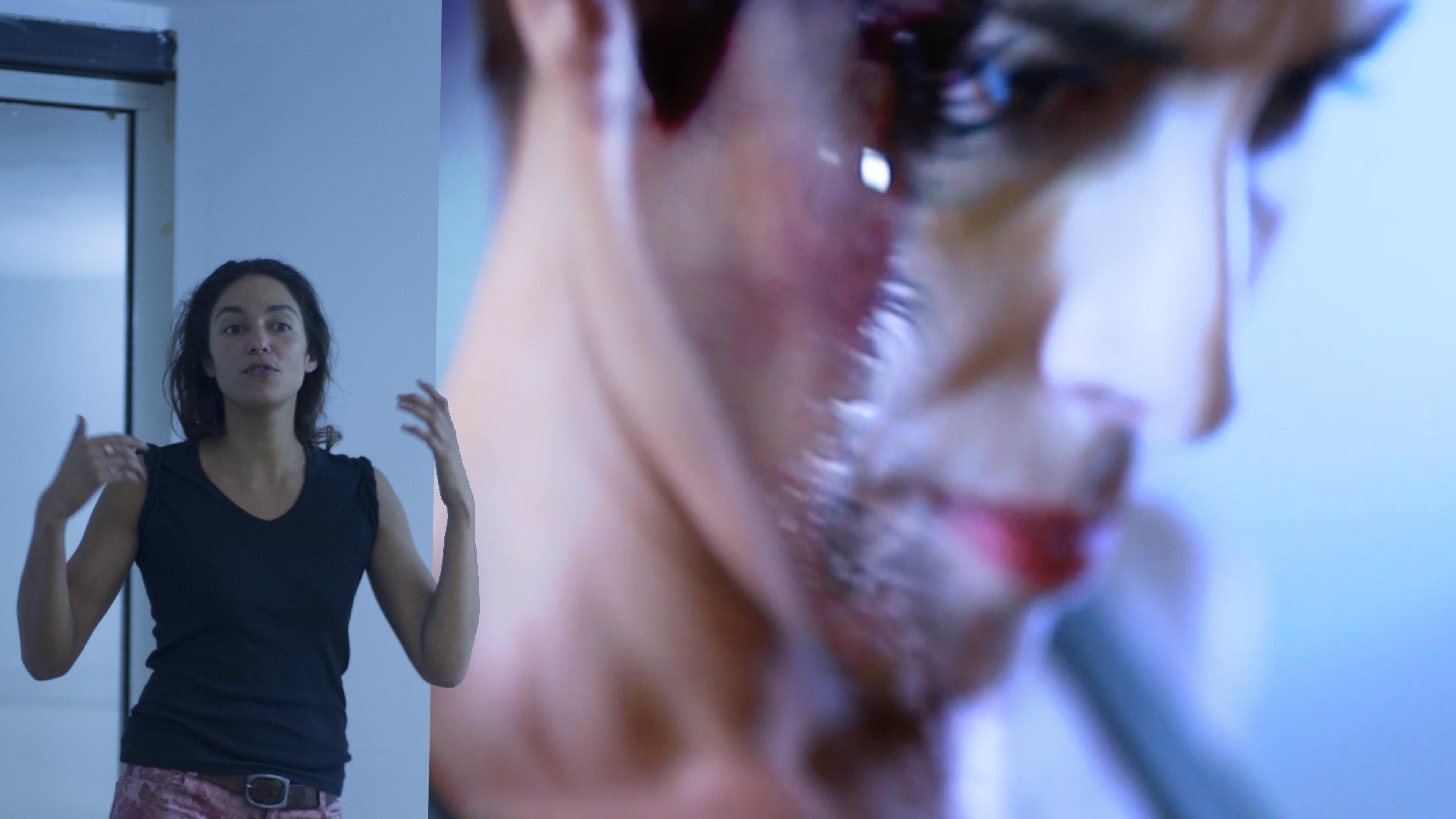 In a closed-door setting, Christian, a neuroscientist working on trans-humanism, is being interviewed.
Claire, the young director, opens up about her own artistic issues in order to take Christian with her to capture him in a moment of truth.

In a closed-door setting, Christian, a neuroscientist working on trans-humanism, is being interviewed.
“The Astronomers” (short film)
Projection using the codes of the short film, the Astronomers, also the name of the exhibition, is the keystone of Vidyakélie’s new project. Les Astronomes draws on his pictorial, graphic or digital practice, which questions allegorical representations of the human condition: Les Vanités.
Les Astronomes proposes a huis clos between three characters: two audiovisual professionals, the film’s director and her lighting designer on the one hand, and on the other, a scientist working on Transhumanism. As the subject of The Scientist requires a theoretical requirement at the risk of vulgarisation, the interview turns into an aesthetic and philosophical reflection on the representation of this process.
In Vermeer’s painting, the astronomer is absorbed by his task, he leaves no room for the viewer, the paradox of this reference is that the epicentre of Vidyakélie’s work is in the opposite direction. The three characters forget their tasks to focus on an interaction, they question each other.
The Astronomer has often been linked to The Geographer, a work cited by Claire’s character by mistake, and the two paintings have long been considered to form a coherent diptych. They are both the same size and were painted at the same time. Although this hypothesis has been disproved, the two works have some interesting similarities. Together they are the only two isolated male representations by Vermeer. The composition and colour choices of these two paintings are very similar, making them a secular derivative of the theme of St Jerome under study. This particularity is also present in the exhibition, where each work has the function of fitting into the other, and is also significant in the projection, where a work on the mise en abîme is also present.

The artist organizes meetings in cafés; in a protocol identical to all, Vidya-Kelie does not speak, but lets her characters speak; Claire, artist, Manu, assistant and Mr Leclerc, neuro-scientist, all three embodied in “LES ASTRONOMES”, a film that the guest watches in the café, with headphones. Afterwards, the spectator will be invited to speak into a microphone, listened to in silence by the artist.

The audio documents will then be transposed into PDF to be presented as necessary extensions to its original script “LES ASTRONOMES”.

*The deployment is a key stage of the script, and precedes the dialogue continuity. It is developed from the synopsis (short summary of the film’s story). This text of several dozen pages will then enable the main plots and scenes of a film to be described in more detail.

Deployment*, installation, print on A4 paper, 20 treatments and scenarios from the film “LES ASTRONOMES” including the originals / Université PARIS VIII, 2018